Take This Job and Shove It!

Let's just say that my week was absolutely miserable. The job I started Monday turned out to be a NIGHTMARE. The people (who only spoke Hebrew because they knew I couldn't understand what they were saying), the work itself (which was nothing related to HR, which was the job I was hired to do), and the office itself (which didn't even have a bathroom...think using a key for a public restroom in the hall. I was basically treated like a secretary/personal assistant to 15 people (which would be fine if the pay was much more and that was explained to me in the beginning). I should have known when I asked for a job description and there wasn't one, or when I realized they didn't ask me for references, or perhaps when I was offered the position an hour after interviewing (I guess I just thought "man they must recognize how uber talented I am and want to scoop me up"). Which of course is probably true in some respects since the job was so encompassing and complicated that they would need to hire 5 different people to handle all the crap they were delegating. But enough of that...it's all in the past. For the first time in my life and very happily I must confess, I resigned from a job (and after only 5 days).

In happier news, I took my licensing exam on Saturday and I PASSED!! woo hoo. Now I can officially add LMSW to my name. I wasn't planning on taking the exam since my major was social enterprise not clinical, but I think in this economy having another credential can't hurt, right?

So here's what I've been working on this week. Bella's mittens by subliminalrabbit. I found the pattern on ravelry and immediately fell in love. I have to admit I don't know anything about the Twilight movie they were inspired by, but I really love how quick they work up and how professional they look. I don't know how long the first one took since I didn't know very much over the week, but the second one is working up much faster. I always save the thumbs for last, I guess that's because it's the part I like the least, well that and weaving in ends. 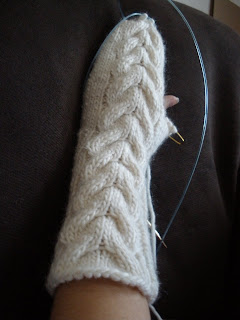