"The Squirrels Will Never Recognize Me Now!" 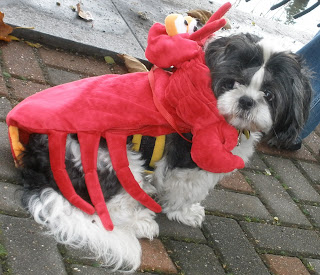 Said the little gray dog to E and I while we were walking him around on Howl-o-ween. His costume was actually a 3 month old baby costume that I picked up the night before Halloween and altered to fit him. It was a little beat up and missing eyes so I asked the manager for 1/2 off, he agreed and I only ended up paying $7 bucks.

I had the buttons on hand and used his lands end fleece jacket to measure fit. I think he was horribly embarrassed, but everyone else thought he was really cute. I thought the costume was especially appropriate since I'm originally from Maine. I thought about tying a sign around his neck that said Maine or Bust and sending a photo to my parents, but got sidetracked. Do I see a Christmas card in the works?...Am I turning into one of those people? Ekk 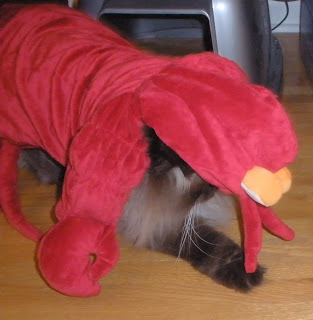 Oh my, how funny! What a trouper he is to wear that costume!