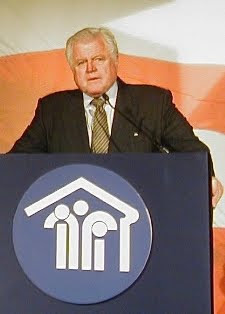 "Every American should have the opportunity to receive a quality education, a job that respects their dignity and protects their safety, and health care that does not condemn those whose health is impaired to a lifetime of poverty and lost opportunity."

Sometimes it's easy to get discouraged and wonder why I do the work that I do. Being a social worker isn't glamorous, it isn't wealth building, and it isn't always gratifying. During graduate school I constantly debated whether I had made the right decision. Two years of an ivy league graduate program certainly puts a dent in your wallet and makes you a little cynical, "why am I paying thousands of dollars to an already wealthy institution, to surface in a horrible economy in a field that pays less then most entry level administrative assistant positions?", I should have just gone to law school I thought to myself.

But when we lose a true social justice icon, like Ted Kennedy, I remember why I do what I do. Because I too believe that every child should receive an excellent public education that sets them up for success in whatever profession they choose, that the color of one's skin shouldn't determine the opportunities that are available for him/her, and that every individual should receive high quality low cost healthcare, regardless of ability to pay.

Ted Kennedy got me my first paid job (well sort of). In 2002, an ear mark grant brought back to Massachusetts by senator Kennedy was given to the Massachusetts League of Community Health Centers. That grant funded my job and allowed the League to train entry level workers (those re-entering the workforce from welfare, layoffs, extended leaves from the workforce etc.) to work in administrative positions at health centers.

Fast Facts... (courtesy of the League's website)
So a big thank you to Sen. Kennedy, not only for my job, but for your passion to social justice and the confidence to believe that the American dream can and does still exist, we just have to continue fighting for it!
Posted by Kari at 1:26 PM