So here I am in blogland. After several years of lurking and reading a number of inspirational craft blogs I decided that I will give into the madness and start my own. Most of my posts will be about the projects that I'm working on with a little bit of my little gray dog mixed in.

Here's what I've been working on this week...In no particular order. The Old Red Barn Quilt-A-Long quilt. I came across this cute and easy pattern when I was searching imagin 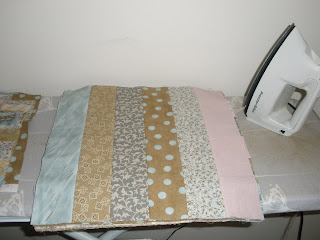 es on flickr and immediately knew it would be a perfect project to use up some of my growing stash. Here's a photo of where I am so far. I'm using an assortment of 100% cotton fabrics in a variety of neutral tones. I decided to make the strips 3 inches instead of 2.5" which gives me a 15" completed block. I plan to make the quilt for a full/queen sized bed, so I estimate I'll need four blocks across for the width and five blocks down for the length. So far I have 15 complete and I plan on finishing up the remaining blocks this afternoon.

My second project for this week was embroidered onesies.
I've seen them everywhere on Etsy and finally decided to give one a go. I had some left over pink denim from a pair 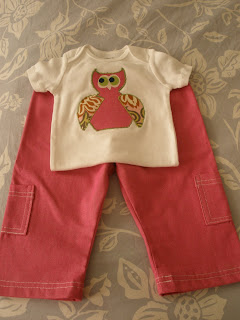 of baby pants that I made a few months back and decided that I would use that for the body of the owl. The other pieces are all scraps from my stash. I used an excellent tutorial that I found here on Sew, Mama, Sew! Overall the process was pretty easy, except for when I got frustrated that the owl body wouldn't fuse to the onsie (and then realized I hadn't taken off the backing paper), crisis averted. I'm a little worried that the beak portion might lift as it's not stitched, I might add a drop of fray guard just in case. The stitching is horribly uneven, but for a first attempt I won't beat myself up too much. Like everything it will get easier with practice.

And my last project (as of last night) was to give the little gray dog a trim. Inspired by several wonderful tutorial videos from via Spanielmom93 I purchased a pair of Andis clippers on E-bay and started clipping. It seemed easy enough, just go slow and be careful right? My poor baby looks like a rat. The body isn't so bad, but the feet are pitiful. It was like the first time you pluck your eyebrows as a teen...I'll just clean them up a bit and several hours later you end up in tears with no eyebrows left. Thank goodness he's a dog and not a child or I think I would have thousands of dollars worth of therapist's bills on my hands. I keep telling him how cute he looks, but I think he sees right through that. 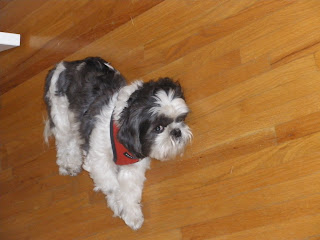 Before photo on left- After on right
...notice he's hiding his feet and won't look at me.

Well that's all for now, Thanks for reading m 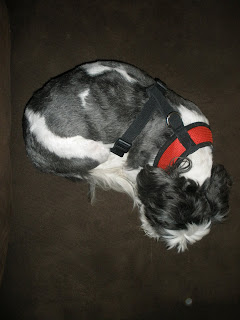 The onesie is adorable. Great job!

Thanks:) I'm hoping with practice my applique skills will get better.